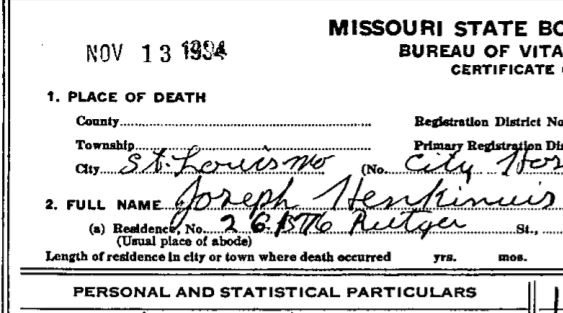 Henkenis, a pure “American” name, but oddly enough not used by anyone permanently living in the United States today.

The year is 1913.  Joe Henkenius is frustrated that no one can pronounce or spell his name.  He’s got a child soon to be born and makes the decision to make it easier for his children.  On 3 May 1913, what we believe to be the first Henkenis was born in St. Louis, Missouri when Joe and Milbrey put a shortened version of their last name, Henkenis, on their first born child’s birth certificate.

Bernard (Ben) Joseph Henkenis was that first Henkenis born.  One other male child, Robert (Bob), was born in 1923 and he was also given the last name Henkenis.

The name was almost shortened an additional time.  Bob Henkenis was just as frustrated as his father – even after the shortening, still no one could pronounce or spell the family name.  He suggested to his wife Millie that they shorten the name to “Henken” to make it even easier.  Millie was “not overjoyed” at at the suggestion and later said her response was “There’s no way my children are going to have a different last name than me.”  The birth certificates of their children are legal evidence of who won that “discussion.”

Bob had one son – me.  No other male “Henkenis” children were born in that generation.  While I have children and grandchildren, none have only “Henkenis” as their last name – they use a last name that is combined with my wife’s name.

The original “Henkenius” is not an uncommon German surname in the U.S.  Joe’s attempt to shorten and simplify it resulted in his descendants using an 19-character last name in order to preserve the name he and Milbrey created.

…..probably not the result he expected.