Wanting something new, I'm changing a recipe from a former co-worker - a work in progress

Politics.  From a young age my parents taught us it was one of two things not to discuss.   Religion we can save for another post….  But why?  Everyone says politics have become more and more a polarizing topic, but if it’s worse now like we think, how was it before?

To answer that question, we’ll look back to my Great Great Grandfather, Frank Hake.  Like most businessmen in those days, Frank had been a Democrat.  But in 1884, that was about to change – Frank had decided he now wanted to be a Republican.  But it wouldn’t be that easy.

...prompted by the party who already have so black a record that old Nick himself could not add one iota to the miserable list...

You see, Frank had never met my parents.  The saying “Don’t discuss politics or religion” obviously hadn’t become standard.  So Frank did, and in what seemingly was Frank’s style it was loud and he bet money on it – with 10-to-1 odds that the Republican presidential candidate would win.  Frank bet $1,000 on James G. Blaine, a sum that the newspaper said was the largest that “ever been wagered on a presidential candidate.”

unless he renounced Republicanism they would ruin his business

Now, the Democratic party didn’t really like this.  In true 2010s style, they threatened Frank and his beer distribution business with a boycott.  The leadership of the Democratic party very quickly got all of the saloon keepers and beer sellers to “volunteer” to boycott Frank’s business.  Frank was about to lose his business.  So Frank gave in, and to add insult to injury, he was forced to donate $100 to the upcoming parade to make it a success.

Now, before you condemn the Democratic (or Republican) party, remember that when these articles were written, the Democrats were pro-segregation (they supported slavery) and anti-women’s rights – the Republicans were the progressive and liberal party then. (My point being both parties have been “the bad guys” no matter where you are on the political spectrum.)

But the 1800’s – that was the age of Gentlemen, and surely the politicians reflected those more civil values, right?

Well, Blaine (R) was accused of selling his influence to businesses (in Arkansas) and Grover Cleveland (D) was accused of fathering a child out of wedlock and forcing the mother into some sort of asylum.  But Grover Cleveland had a defense – he did not think the child was his, but had taken responsibility to protect his businessmen friends who where married and also sleeping with the widow Halpin.

The “October screw-up” was someone in the Republican Party criticized Catholics. In addition, the Republicans attacked the prohibition party in New York, who made a big push there (they got 25,006 votes). The same happened with the Catholics – a heavily catholic New York came out to vote heavily and the Democrats won by 1,047 votes in a normally Republican New York.  This tipped the election and gave them the first victory since before the civil war. The popular vote was only about 100,000 votes in the Democratic favor (.6%) (Democrats were in the South (they were the confederate government) and the republicans being anti-Slavery had kept them in power since the civil war. )

So Grover Cleveland won, and Frank would have lost his bet. But his business was successful for many more years. I haven’t been able to find out what happened to it, but he became physically handicapped and retired quite wealthy. (Only an appreciation for good beer was passed down in inheritance to me.) 🙂

All of this was reported in The Fort Wayne, Indiana newspaper The Gazette in October of 1884.  But in true CNN/Fox News style, shortly after the articles above were written a competing newspaper claimed the Gazette had made up the story. 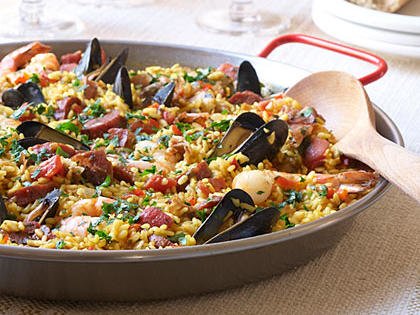 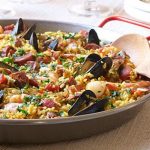 Print
Traditional Spanish Paella
Nourishing, vibrant, and served without pretension, paella has held a place of honor and practicality in Spanish homes for centuries. If mussels aren't your favorite, you can easily substitute littleneck clams in their place--just be sure to thoroughly scrub the clams' shells in cold water before using. To round out the meal, choose a good Spanish red wine from the Rioja region, grab a crusty baguette, and serve with a light salad.
Course: Main Course
Cuisine: Mediterranean
Servings: 8 servings
Ingredients
Herb Blend:
Paella:
Instructions